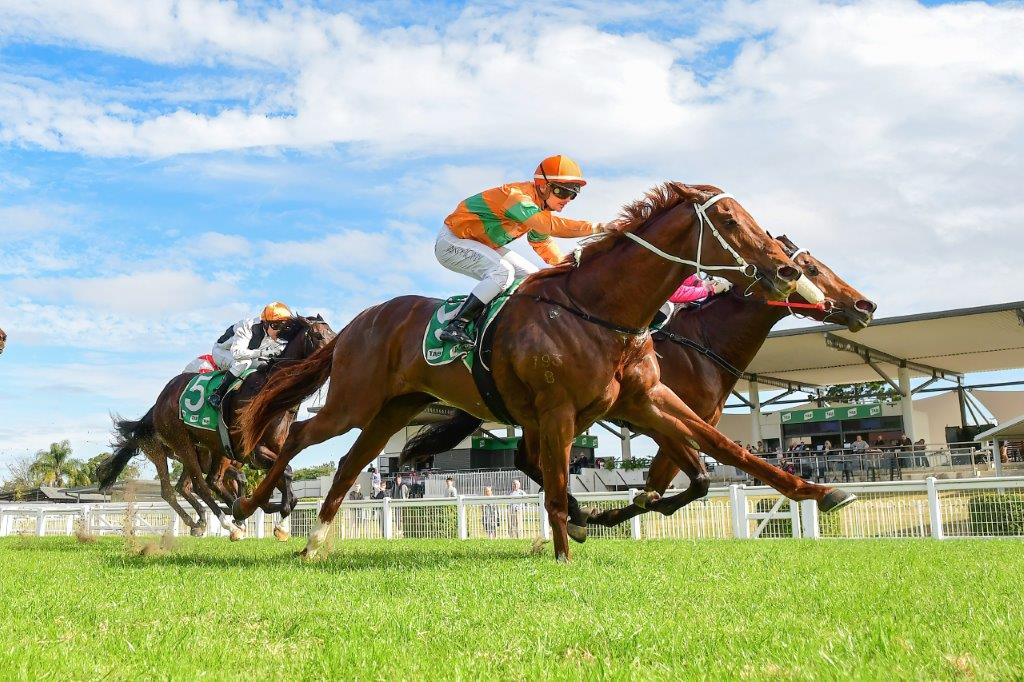 Racing returned to the Ipswich Turf Club on Thursday for a nine-race programme. It was the first meeting at the Bundamba circuit since Ipswich Cup day almost two weeks ago.

The racing surface has continued to dry out over the past week so much so that it was upgraded to a Good 4 prior to the commencement of race 1.

The day’s racing was competitive but there is no doubt that the stars of the day were the training combination of Toby and Trent Edmonds and jockey Robbie Fradd who each recorded winning trebles.

The father and son training partnership of Toby and Trent Edmonds enjoyed the perfect day of racing at Ipswich on Thursday.

While Toby was looking after Empress Zou at Murwillumbah, Trent brought a team of three to Ipswich.

The Gold Coast stable has at times struggled for form this season but that certainly wasn’t the case today with all three Ipswich runners returning to their Gold Coast base a winner.

Burlesy kicked the winning day off for Team Edmonds in race 3, the Sirromet QTIS Three-Year-Old Maiden Handicap over 1350m.

The son of Zacinto was having his first race start since finishing fourth over 2200m here in December. After drawing the outside gate in the field of 11, jockey Robbie Fradd made his move just prior to straightening.

Wearing the Archer Park colours, Fradd improved his position before the gelding let down beautifully to run down the leaders and win by half a length. The win was Burlesy’s first at start number seven.

Prince Amongst Men looked like one of the best bets of the day in race 4, the Schweppes Maiden Plate and so it turned out. Partnered by Noel ‘The King’ Callow, the pair had the field spread out as they ran along in front over the 1200m assessment.

The speedster led into the straight by three-lengths and dashed away to win by 1.8 lengths. The son of Winning Rupert had been knocking on the door for a win and finally broke through at start number 11. With the authority of the win, his second victory shouldn’t be too far away.

Prince Amongst Men was Callow’s only ride for the day. He’ll be glad he made the trip to Ipswich.

Team Edmonds third and final win for the day came in the Ray White Class 1 Handicap over 1200m with Philly Special. The impressive feat was made all the more special given it was a race-to-race treble.

Things didn’t start well with the lightly raced daughter of I Am Invincible exiting the gates last. Robbie Fradd didn’t panic and quickly mustered speed to cruise up the fence and settle slightly better than midfield.

The gap opened as they straightened and Philly Special loomed up to contend for the lead. She really picked up strongly in the closing stages to win by half a length.

The four-year-old mare has only had the five starts but based on Thursday’s performance, she has plenty of wins still in store.

Fradd Collects Hattrick Of His Own

On Ipswich Cup day, jockey Robbie Fradd rode the first four winners at the Gold Coast.   The well travelled hoop was at his winning ways again at Ipswich on Thursday.

As previously mentioned, Fradd won aboard Burlesy and Philly Special for Edmonds Racing.

In the final race of the day, the Vale Sonny Roberts Class 1 Plate, Fradd teamed up with the Paul Jenkins-trained Prickly Poppy.

Fradd settled midfield, allowing others to set a decent tempo over during the 1680m. The veteran jockey got his mount moving on the turn before getting to the outside in the straight. Race favourite Ghostwriter was fighting in front but Fradd got busy on Prickly Popply in the concluding stages to claim victory in the shadows of the post.

Prickly Poppy is owned by New Zealand racing tycoon Sir Peter Vela and provided Fradd with his third winner of the day.

Capewell Has The Magic Touch

Master horseman Jake Capewell has turned the fortunes of countless horses around through his breaking and pre-training business.

In recent times, Capewell has taken his knowledge and trained a number of horses in his own right.

The most notable of these being Sir Warwick who won four races in a row immediately after Capewell began training him and has since won The Fitzroy in Rockhampton.

Capewell’s golden touch with turning horses around was again on display at Ipswich on Thursday with Pretty Flash. The former Steve O’Dea and Matt Hoysted-trained filly had an embargo placed on her for refusing to load in November last year.

Since then she has joined Capewell’s team and there was no sign of any issues as she bounded out of the gates in the Seven QTIS Three-Year-Old Maiden Handicap over 1350m.

Having just her second start for Capewell, the daughter of Husson settled second for Anthony Allen. Pretty Flash settled in for the fight with Toomuchinformation up the Ipswich straight. The chestnut filly got her head down at the right time to win a bobbing finish.

Heading into Thursday’s Ipswich meeting, Sam Collett held a one win lead over Jimmy Orman in the 2021/22 Ipswich Jockey Premiership.

Collett extended her lead to two courtesy of her win aboard Class Of Royalty in the Kingsley Lawson Lawyers Class 6 Handicap over 1680m.

The Group 1 winning rider worked forward from the wide gate to settle in a handy position. Colett appeared to have a lapful of horse under her as they straightened for home. The John Zielke-trained galloper stretched out strongly over the closing stages to win by 1.8 lengths.

With just four Ipswich meetings remaining in the racing season, the race for the jockey tilte is fierce.

Unfortunately for Collett she only has one more meeting to add to her tally of wins. She is heading home to New Zealand for a few weeks holiday following her ride on Listed Gai Waterhouse Classic winner Centrefire in the Chief De Beers on July 9.

Regardless of whether Collett wins the title it has been a great achievement to even be in contention given she entered the competition half way through.

Race 5 - Philly Special: The Toby and Trent Edmonds-trained put the writing on the wall recently when winning a Gold Coast trial in impressive fashion. She went on with it in her first-up run here over 1200m. She found the line well and dug deep when called upon. She was a year between runs so will only take benefit from today. With just five starts under her belt, there is plenty of upside with this four-year-old.

Race 9 - Prickly Poppy: While today’s win was only a Class 1, this three-year-old filly has the makings of a decent stayer. She had about three-lengths to make up straightening so to run down a quality horse like Ghostwriter was a big effort. Her win today kept her unbeaten record in tact. In time she will make a good 2000m+ horse.

Racing returns to Ipswich next Wednesday, July 6, for metropolitan racing.